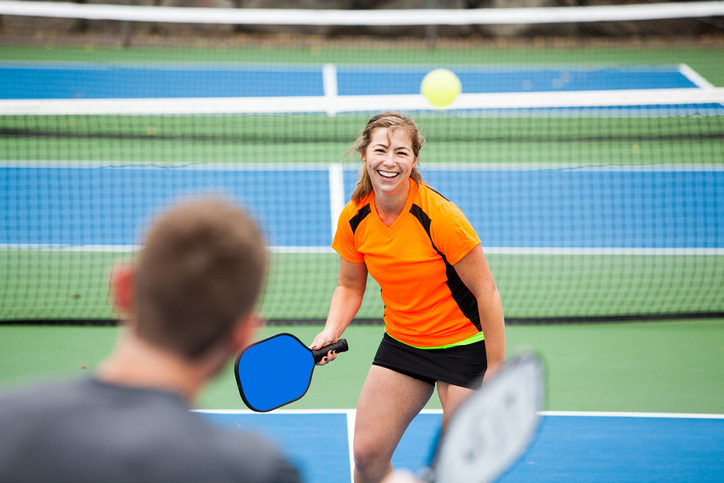 How to serve – the basics

Here are the basic pickleball rules that the serving team must follow.

Pickleball serves should be done diagonally, beginning with the right-hand service square and alternating each serve. The serve must land on the diagonal service court after clearing the seven-foot non-volley zone in front of the net.

The server must keep both feet behind the back line and serve underhand with the paddle below the waist when serving. Without being bounced, the ball should be hit into the air. The serving side will continue to serve until a fault in the service is discovered, at which point the service will be handed over to the opposing side. (However, if the ball hits the net but still lands in the proper serving court, the serve may be overturned.)

When serving, the server must keep both feet behind the back line. The service is performed underhandedly, with the paddle making contact with the ball just below the waist. On the serve, the server must hit the ball in the air. The ball may not be bounced and hit off the bounce by the server. Only one serve attempt is allowed, unless the ball strikes the net on the serve and lands in the proper service court, in which case the serve may be taken over. The first serving team is allowed only one fault before handing the ball over to the opponents at the start of each new game. Following that, both members of each team serve and fault before the ball is passed to the opposing team. When the receiving team wins the serve, play always begins with the player on the right side of the court.

What are the rules for serving in pickleball?

The serving is to be done underhand. Paddle contact is required to exist below the waistline. The serve will begin with the player holding at least their foot behind a baseline, and neither of their feet can touch any point of ground before the ball is hit.

It follows three principles to do Pickleball serving. The serve does not land in the Non-Volley Zone (also known as the Kitchen) or the Non-Volley Zone Line. However, the serve may land in any other line — the baseline, sidelines or centrelines. If you do the violations then you commit to a fault. You lose the rally and serve. Be cautious about violating these regulations and committing an offence for the court. For example, striking a serve above the belly button or the head of a paddle above the wrist will count as an illegal serve.

The Official Rulebook for Pickleball has created the drop serve for players with a physical disability (for instance players with one arm or leg) The official rule was created for persons with disabilities. When completed according to the rules and procedures the drop serve will never bounce higher than your navel. If you hit a drop, there are no additional restrictions or positions as such as moving a hand to the upper part of your wrist.

How to do a pickleball drop?

Pickleball Drop serve was first contained in the Official rule book for pickleball as it is a safer and more comfortable service to players with a physical disability. The Drop serve has also additional benefits the drop serve may be used for serving one or more players – using one of the arm instead. There are a few rules to know in order to drop or release your pickleball on your drop serve: You must drop it at a natural angle that can range. The use of your hands. B) to allow it to fall from his paddle and hit his body.

What makes a pickleball serve illegal?

When serving at pickleball the paddle handle cannot be above the wrist. A single serving lasting more than 10 seconds. All pickleball serves begin with an update the match’s score.